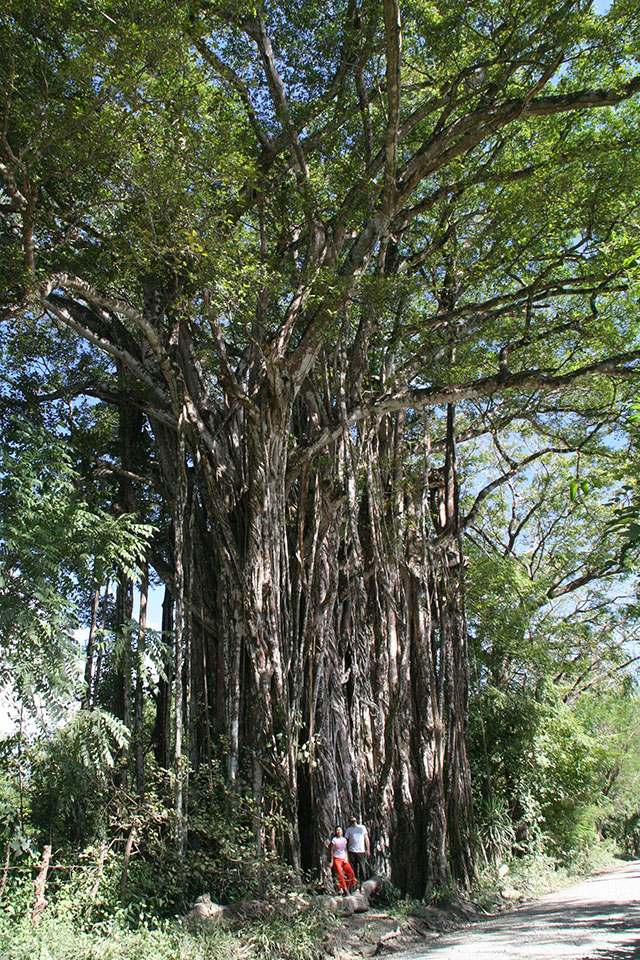 Cabuya is a very magical town. It’s the most isolated town on the peninsula because the road between Cabuya and Malpais is only passable for 4-5 months in the year. In the old days, the residents of Cabuya used to get their supplies by swimming out to a boat that would come once a month. They would swim with a list of supplies, and swim back with what they had ordered the month before.

Over 35 years ago, Costa Rica’s national park system was created because of the efforts of two foreign Montezuma residents, Olaf and Karen. They organized foreign donations to buy much of the farmland at the tip of the peninsula near Cabuya, which has since grown back into jungle, mostly on its own. Cabo Blanco Reserve was the first park in Costa Rica’s National Park system, which has since grown to cover more than 30% of the country, the highest percentage of parkland of any country in the world.

Cabuya has one of the largest trees in all of Costa Rica, shown in the photo on the right. A 90-year old man in Cabuya who has lived there all his life says it was the same size when he was a boy, so it’s definitely quite ancient. It’s worth a trip to Cabuya just to see this tree.

It also has an amazing snorkeling and diving area. Part of the sea near the park is a protected Marine habitat, so the area abounds with tropical fish. Several professional divers have remarked that diving at Cabuya Island is one the best place on the Pacific coast of Costa Rica, because of the quantity of fish and the protected marine reserve of Cabo Blanco next door. There’s also a beautiful fan coral reef. Adding to the mystery of the island, there’s a cemetary on it, and at low tide, its possible to walk out to the island across a spit of rocks.

Hotels are still cheap in Cabuya and there are many bargains. There are a couple of good surf breaks that often have no one on them, including Playa Los Cedros,and the Rio Lajas Rivermouth.

Cabuya is also a great place to see wild animals. Because it’s next to Cabo Blanco park, which is a relatively safe place for animals to live and breed, the neighboring areas see a lot of extra wildlife. For example, a large family or two of peccaries, a small wild pig, lives in Cabo Blanco and regularly forages in parts of Delicias. This is an endangered animal that appears to be making a comeback thanks to the park.

For more on Cabuya, go to www.cabuyacr.com: click here