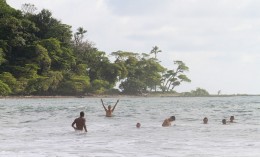 The Manzanillo beach is sheltered by palm trees and erstwhile almendros looking out from the sand. At low tide visitors can walk over the rocks to a huge, shallow lagoon which is covered by a rocky reef. It is known to be a great snorkeling spot and features the best morning light. The perfect place for swimming is on Playa Ario, a 10-min walk to the north, from the Rio Manzanillo. From here further to the north are the quiet secluded beaches and the estuary of the Rio Bongo which has been recently declared a Wildlife Refuge to protect sea turtles who make their way to this place to lay their eggs in the sand.

The highlight of Manzanillo beach is the annual sandcastle competition hosted here. People claim a spot in the early hours of the morning and spend the entire day building works of sand art. Later in the day, when the tide returns, the ocean will take most of the creations back to the water. The party does not stop however and continues late into the day with beer and music visitors come here during this time to watch the sand art in action and guzzle down a few beers without wanting to really participate in the contest.

Visitors can move to the Gasndoca-Manzanillo Wildlife Refuge from the Manzanillo beach, which starts at the southern end of Manzanillo Beach. The Gandoca-Manzanillo Wildlife Refuge preserves endangered coral reef and the lowlands of the southern Caribbean coastal region of the Costa Rican area. This natural refuge is a haven for nature lovers and underwater wildlife enthusiasts. Tropical fish, whales, coral reefs and dolphins make for a spectacular around the region.

The village of Manzanillo Beach is located south of Puerto Viejo de Talamanca, it circles the Gandoca-Manzanillo reserve. This has been an erstwhile fisherman community and has since burgeoned into a tourist region and an important source of income for the locals.  Manzanillo Beach is an idyllic and romantic getaway though it’s not known for its nightlife. Travelers looking for ‘Caribbeanisuqe’ nightlife should pick Puerto Viejo de Talamanca as their preferred nocturnal party zone. Visitors will find lots of live music and parties in there in addition to several shopping and dining options. The Manzanillo Beach is made of bright husky sand and is often totally isolated except for a few stray tourists here and there.

Though the Manzanillo Beach is a bit jagged in nature, it features excellent snorkeling conditions especially in the nearby lagoon, sheltered by a rocky reef that teams with the region’s indigenous flora and fauna . With the touristy crowd thronging to the neighbouring Malpaís and Santa Teresa towns, many visitors frequent the relatively quieter Manzanillo Beach (Playa Manzanillo) to escape the more boisterous southern beaches. Walking along  the pristine beaches to the north of Manzanillo is one of the main attractions in the region.  These cast away style beaches lack road access or even accommodation structures. Travelers with four-wheel drive vehicles can make their way up to the isolated beaches; however, the drive is virtually impossible during monsoons. For visitors making a trip to Puerto Viejo, there are lots of other beaches down south other than Manzanillo where they can enjoy some true blue Costa Rican surf sun and sand.

Those bitten by the culture and adventure bug can explore the nearby Manzanillo village, which even now sports the ancient Caribbean town look with vibrantly painted structures and hot stove meals. Learn fascinating tit-bits about the history of the region by striking up a conversation with friendly locals or savor the local coconut milk delicacy at one of the humble eateries in the main town area.