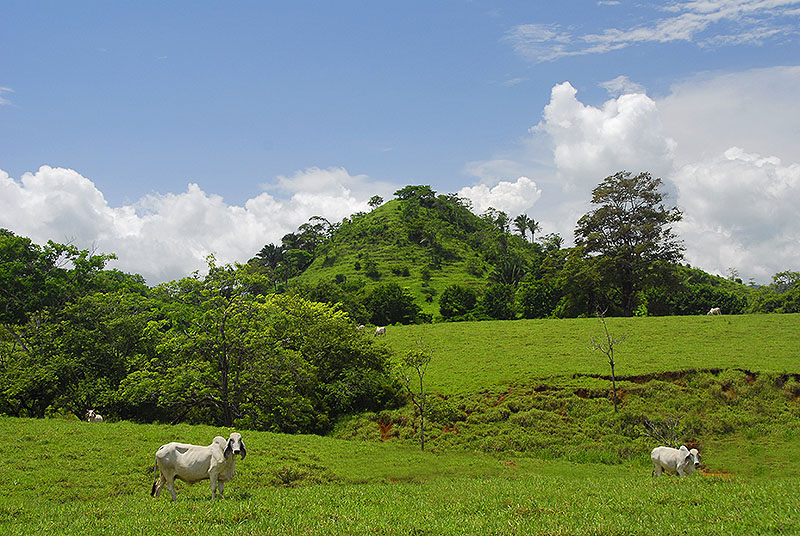 Cobano, pronouced CO-ba-no, not co-BA-no, is the crossroads for the southern Nicoya Peninsula. It has the area’s only bank, the only gas station, the best hardware store, and the best grocery store (Super Maya). On monday mornings there’s a small farmer’s market half a block north of the city center’s main intersection (where the bank is), and here you can get all your fruit and veggies cheapest and freshest.

In addition, there are several schools, including a private school and the area’s only high school. The police station here covers not only Cobano, but Malpais, Santa Teresa, San Isidro, Santiago, Playa Hermosa, Betel, Rio Negro, Manzanillo, etc. They are incredibly underfunded by the Costa Rican government and rumour has it that they aren’t even given enough money for gasoline to drive to the beach areas. Fortunately, the area has very little violent crime.

Cobano has a post office too, and we have found that you can send something, regular mail, from the U.S. and it arrives in 7-10 days usually. I wouldn’t send anything too valuable, but books from Amazon and that type of thing arrive quickly and cheaply. Since there’s no regular post office delivery service to places like Montezuma or Santa Teresa, you need to go by the post office every once in a while to check if your package has arrived.

There are many people offering professional services of various types in Cobano, including several lawyers, a couple of dentists, two veterinarians, etc.

Cobano has at least two “viveros” which are plant nurseries. One is in the Los Mangos area, to the west of town, and the other is easier to find, by just heading north from the main intersection, until you see it on the right. They have a huge assortment of tropical fruit trees and can order many things that they don’t have, if you know the name of it in Spanish.

One of the best new arrivals to Cobano is an authentic French bakery, which is on the right hand side of the street if you’re heading east from the town center, about 1-2 blocks away. It’s owners are from France and they are very good at baking. Definitely give it a try if you don’t mind getting addicted to chocolate eclairs and croissants. They can also make the most incredible chocolate birthday cake you will ever taste!

Behind Cobano are a set of gorgeous mountains, with views overlooking the entire southern peninsula. Land is cheap up there, but access can be difficult, especially in rainy season. This area is still wild, with few people and lots of animals, including rare species such as peccaries, jaguars, and pumas. There are many waterfalls back in these hills as well, including the gorgeous Florida Waterfall, and others in Santa Fe, and a spectacular one on the Rio Ario.