Tambor is a town on the shores of a gorgeous circular bay called Bahia Ballena. It was named this for the whales that used to come to the bay, but pollution and the human population have driven the whales out into nearby waters. They used to have their babies in its protected waters… I’m not sure where they’re birthing these days but it’s sad that they’re not seen as much here now. Tambor has a small marina, and because Tambor Bay is protected from large waves, is a good place for boaters. Its gentle surf is also ideal for families with small children.

Tambor has a very different culture from the other beach towns on the southern Nicoya Peninsula. One realtor advertises it by saying “Looking for sex, drugs, and rock and roll? Well Tambor isn’t for you…” The foreigners who have settled here are mostly from the United States, and an older crowd. The area developed earlier than the other beach towns, so there are many well settled developments such as Los Delphines and Tango Mar. Tambor has at least two golf courses, and the area’s only casino.

This area is also known for crooked real estate deals, so be very careful if you plan to invest here. Ask around to find out who can be trusted.

Tambor is nestled in the valley of a huge horseshoe bay – the Bahia Ballena, which translates in English as the whale bay. Come dry season and these humungous creatures would make their way to the bay. However, presently due to a frenzy of coastal activity the mammal guests have stopped visiting the bay of Tambor.

The Tambor valley is encircled by verdant forest hills that are all a part of the biological heritage of the Nicoya Peninsula. The northern portion of the bay lines the Curu Wildlife Reserve that houses a wealth of Tambor’s rich ecological habitats and a plethora of indigenous wildlife species. It is entranced by the Tortuga Island, a natural tropical haven that can be toured on a boat from Tambor. This tiny village community features a very calm, relaxed and laid back atmosphere and is unlike the flashier and more hippie-boho Costa Rican destinations. The area has several vast regions of barren, deserted plots of non materialized real estate plans.

If you go towards the north, about 6-7 kms from Tambor Village, you come to the Barcelo’s Hotel Playa Tambor. It is 402 room property that is believed to be Costa Rica’s pioneer all-inclusive holiday resort. There is also a golf course in the vicinity where you can buy a day ticket for a 9-hole golf course.

From the promenade at the southern end of Tambor visitors can walk around the tip of the coast. An adventure packed walking path snakes between the beach and just behind the rocks. After a walk of about 5 kms you reach the Cocalitos Beach with the El Chorro waterfall cascading beautifully into the sea. The area features a large rocky pool that offers luxurious bathing opportunities. Horseback riding around the area can take visitors to the vantage point view hills of Tambor from where they can enjoy sweeping vistas that go as far as Montezuma. 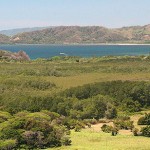 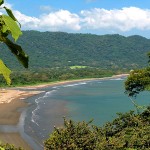 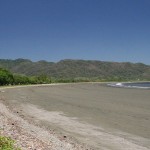 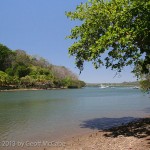