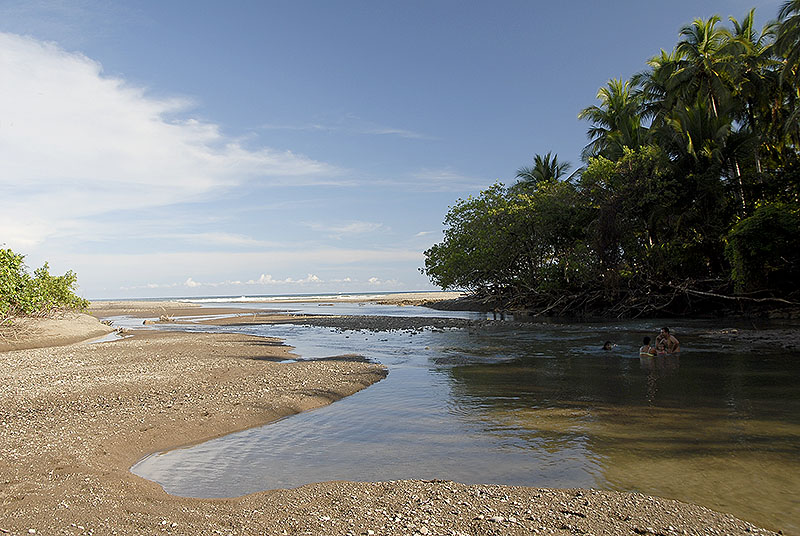 This is a very beautiful spot. The largest river on this side of the southern Nicoya Peninsula empties here. A giant Espavel tree towers over the bridge to Cabuya at this spot. Park nearby and walk out to the beach. You’ll often find families with kids in this area, swimming in the river’s large pools at its mouth. Depending on what season, these pools may be closed off from the sea (usually in dry season) but in wet season, the rivermouth may be open and these swimming holes will be a mix of salt and freshwater. It can be a spectacular place… great for a picnic. 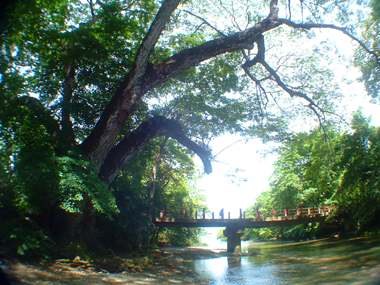 On very rare occasions, a saltwater crocodile is found here. They swim here through the surf all the way around from the Rio Bongo on the other side of the peninsula, or from the swamps in Tambor. These days, the crocodiles only get to around 12 feet long, but before all the big ones were killed, they used to get to the size of Nile crocodiles… 20 feet or so, and so were much more dangerous. Now when one shows up (perhaps every 10 years or so), the park service will catch it and take it back to the Bongo.

While you’re here, drive a few hundred meters past this bridge and on the right you’ll see the largest tree on the entire peninsula. It’s a giant higueron, and perhaps it’s the biggest in Costa Rica. If anyone reading this has seen bigger, let us know. Suffice to say that it’s HUGE. There’s a 90 year old man in Cabuya who says it was the same size when he was a boy.

This is a good surf spot, especially around low tide, but not often surfed. If you want the waves to yourself, this is a good place. As with Los Cedros and Reyes, you’ll need a good south swell for there to be any decent waves.

The rivermouth can be surfed at high/medium tide, with both lefts and rights. There are a few large boulders out there which you don’t have to worry about at high tide, but at mid tide, you’ll need to know where they are. The Reyes surf spot is just to the south so you can head there in other tides, and it’s a better, longer wave anyway.

One of the best hikes in the peninsula is up this river. There are several waterfalls, including one of the biggest in the peninsula, but it takes around two hours to reach it. People love this hike, especially on a hot day in the dry season, when the river and shade of the huge trees on the riverbanks will keep you cool.