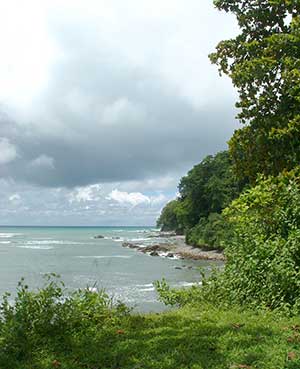 The luxuriant Republic of Costa Rica is renowned for housing over 5% of the biodiversity of our planet as well as for having the largest number of national parks and protected areas known as nature reserves. Fervid nature and wildlife lovers frequently choose this country in Central America in order to explore to the fullest the natural beauty and biodiversity of the Carabbean lowlands. The consummate adventure for any tourist who wants to embrace the quintessence of nature s splendor is provided by a memorable trip to Cabo Blanco National Park in Costa Rica. Also known as the Cabo Blanco Absolute Natural Reserve, this legally protected area is located on the southern Nicoya Peninsula, very close to Malpais and Santa Teresa, two picturesque beach town in Puntarenas Province.

This town is extremely popular among adventurous tourists, passionate surfers and beach enthusiasts across the globe. Both the white sandy beaches of Malpais and the neighboring pristine beaches of Santa Teresa are deemed by Forbes magazine as one of the ten most magnificent beaches in the entire world. These two breathtaking beach towns are also renowned for being the preferred holiday destinations of A-list Hollywood stars such as Mel Gibson and Bobbie Phillips and top models such as Gisele Bundchen. Many celebrities have also started to build spectacular mansions with all the amenities in the spectacular beach towns of Malpais and Santa Teresa, which are also famous for their modern day incredible luxuries. Many film, music and fashion celebrities have also chosen these unique beach towns as the perfect vacation place due to their proximity to the luxuriant Cabo Blanco natural reserve.

Cabo Blanco National Park in Costa Rica is an important part of the administrative area known as Tempisque Conservation Area, which also includes forest reserves and wildlife sanctuaries. Founded in 1963, this natural reserve covers 4,420 acres of water and 3,140 acres of land and it was the first most important conservation project in Costa Rica. The governing body of this national park is the National System of Conservation Areas or SINAC. Until the 1960s, these lands have been used mostly for farming. Olof Nicholas Wessberg was the initiator of this conservation project. He was so impressed with this vivid oasis abundant in trees and wildlife that in 1963 he decided to buy together with his wife 3,100 acres of land in the Malpais / Santa Teresa area and to turn this land into the first protected area of Costa Rica.

This large, verdant and magnificent national park is home to the most impressive flora and fauna in this country, including over 140 species of trees and as well as many species of mammals and marine birds. The abundance of diverse fauna and fauna is due to the location of this national park, between the rainforest and the dry forest. Therefore, the trees found in this natural reserve and native to the Nicoya Peninsula are both evergreen trees such as the imposing Espavel, the unique Cortez Amarillo and the splendid Guacimo Colorado, as well as deciduous trees such as the beautiful Guacimo, the Indio Desnudo and the Pochote.

When choosing this nature-friendly destination, tourists also have the opportunity to watch in their natural habitat monkeys which are native to Costa Rica, including the white-face and the howler monkeys, which are a real treat for wildlife viewing enthusiasts. Other mammals which can be spotted feeding in the wild include the white-tailed deer, the white-nosed coati, the margay and even the coyote. The Cabo Blanco island is also home to impressive marine birds such as the pelicans and brown boobies, as well as to a wide range of fish, conch and crabs.

Cabo Blanco Absolute Natural Reserve also houses the San Miguel Biological Station created for the purpose of promoting and supporting environmental research and education. It is equipped with a reference library, labs and classrooms where tourists can learn more about the ongoing conservation efforts in the picturesque and serene Costa Rica.