Authorities investigate, but no action has been taken to date against illegal gillnetters.

Rainsong Wildlife Sanctuary has been trying to organize to protect the area’s sea turtles, which are being killed for their shells (especially the highly endangered Hawksbill turtle), sold to Chinese companies for carving into trinkets.

The eggs are routinely robbed from the nests from Playa Carmen all the way up to Manzanillo and beyond. Every night, a local guy on an ATV, rides up and down the beach, looking for turtle tracks, and then steals all the eggs to eat or sell. At this time, only a very small fraction of turtles eggs are surviving to hatch, and the area’s sea turtles are headed towards certain extinction.

Turtles live for decades, and lay eggs 3-4 times per year, so there’s hope if we can stop the egg-robbers. Montezuma has two turtle-protection groups on its beaches (Playa Grande and Playa Montezuma), but the Santa Teresa side doesn’t have anything organized yet.

Santa Teresa needs to get organized for this, because just north at Manzanillo and above, it has been discovered that all four of Costa Rica’s sea turtles are laying eggs, making it one of just a small handful of sites in the world with so many sea turtle species in one location. This even includes the world’s largest sea turtle, the mighty Leatherback!

It takes a lot of work, money, know-how, and determination to fight for the sea turtles. Poachers don’t like their livelihood being taken. Perhaps they could be hired as protectors. 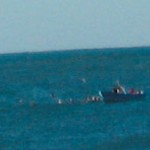 Sea turtles are drowning in illegal gillnets used in the protected waters of Caletas/Ario Refuge.

Authorities investigate, but no action has been taken to date against illegal gillnetters. 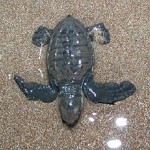 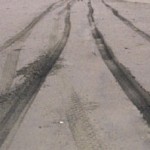 Cars on Playa Manzanillo crush both turtle nests and hatchlings trying to make their way to sea.