There’s now a faster way to drive here than before, using the new highway to Caldera, but it’s tricky to find the route. Here’s how to do it.

Drive to the west from the San Jose airport and take an exit after 10 minutes or so to Atenas. Turn left and cross over the highway, and drive 2km. Turn left between a blue school and a soccer field (there’s no sign to the new highway). Drive another 3.5km and you’ll reach the new highway. Turn left just before the highway (not to the right like you’d think) and this will take you to the onramp. This freeway will take you to Caldera and it will curve to the right, leading all the way to Puntarenas. You’ll see a sign on the right that will loop you onto the road to Puntarenas, and then you’ll drive to the end of the road. Puntarenas is on a long spit of land, and the ferry terminal is on the very tip of it. The total journey can take as little as 1 1/2 hours, saving you an hour or so from what it used to be.

There are now two large ferries (Tambor II and Tambor III). To find out the times, call 2661-2084 ext 4. It’s only in Spanish, so if you don’t understand Spanish, we suggest asking the rental car company to translate. There are two ferries, the first to Paquera and the second to Naranjo. Take the Paquera Ferry, and once it lands, follow the main road which will eventually take you to the left (south) to Cobano (about 45 minutes). You’ll pass through Tambor and then Cobano.

When you arrive in Cobano, just pass directly through town, and the paved road will end. Go another mile or so and take a left at the road (you’ll see a sign to Malpais.) Drive twenty minutes more to the Malpais/Santa Teresa Crossroads (known as “El Cruce”). At some point you’ll pass a gas station on the left, which is the only one in the Mal Pais area, so it’s probably a good idea to fill up there. When you arrive down at the main beach road, everything to the left (south) is Malpais. You’ll be in the Playa Carmen area, and everything to the right is Santa Teresa (with most of the hotels and restaurants.)

It will take around 4 1/2 hours. You should rent at least a small 4×4 vehicle such as a Terios or Bego, even in dry season, and in rainy season, a 4×4 could be essential just to make it to town. There are a few lower-priced car rental companies that will save you around $25 per day, as compared with the famous U.S./International brand car rental agencies but many of them have very poor customer service. Also, you should know that the advertised prices that you find on the internet for Costa Rica car rentals are often lies when they’re below $70 per day. They will not tell you about the ~$25/day mandatory insurance. So be careful and be prepared for a shock when you show up at the cheapest car rental agency. 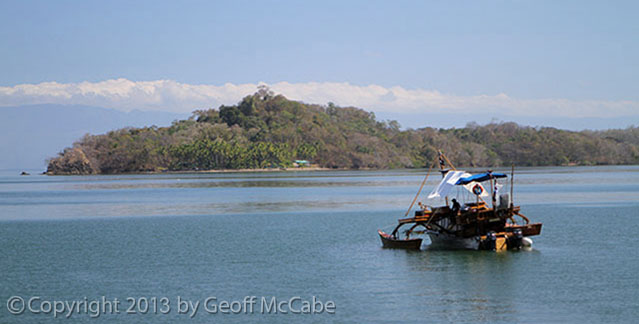 This is a truly beautiful drive for nearly the entire time. In the central valley on the new highway you’ll see a beautiful, deep jungle river gorge on your left with hardly any development in it. Once you arrive in Caldera, which by the way is great for surfing (Surfing Caldera), you’ll be driving along the ocean and will also pass the Barranca rivermouth, which is one of the longest lefty point breaks in the world. (More on that here: Surfing Barranca.)

After that you’ll drive through the only ugly part of the journey, which is the Puntarenas peninsula, out to the ferry at the tip. On the ferry you can see all kinds of amazing sea creatures if you’re lucky. I’ve seen whales, dolphins, manta rays, sea snakes, jellyfish, schools of flying fish, etc, or you can hang out on the top floor, listening to music. Sometimes it can even become a party up there, with people drinking beer and dancing. This is especially likely on the early evening ferry if there happens to be a sunset while you’re up there.

After arriving in Paquera, the 60-90 minute drive to Santa Teresa is mostly in jungle and through a few cattle fields. You can see monkeys in the trees, or possibly a coati crossing the road. Around 15 minutes after leaving the ferry, on your right will be Curu Park, which is the best national park to visit in the area. There they have scuba, a spider monkey in an enclosure, scarlet macaws flying around, and a beautiful white sand beach.

Which is better: San Jose or Liberia route to Santa Teresa?

Although the total journey is 4 1/2 hours or so, a lot of it will be on the ferry or in line there, so the actual driving time can be as little as 2 1/2 hours. So, compared with driving from Liberia airport, the route from San Jose is preferred by most, since it’s less tiring, you get to enjoy the ferry, and you can avoid a bad stretch of unpaved road that the other route requires.